What is the cost of insulating a bulk storage tank?

Corrosion reduces reliability of bulk storage tank assets and increases total cost of ownership. The effects of corrosion can include:

Asset owners should consider the following steps to reduce their risks against corrosion and the associated costs.

The resulting corrosion from moisture under horizontal panels discovered when the tank started leaking just months after completion of a 20 year inspection.

Frequent inspections reduce risk against the risk of the unknown

What causes corrosion at the base of bulk storage tanks?

Generally speaking, corrosion occurs with three elements: long term exposure of unprotected steel to moisture, chemical makeup of the moisture and surface temperatures between 32 and 212 degrees (F) that promote corrosion of steel. Specifically with insulated bulk storage tanks, repeated moisture intrusion into absorbent insulation adds to this equation and also robs a tank of its energy efficiency.

Owners of bulk storage tanks frequently want to expose the tank chime. The tank chime refers to the bottom of bulk storage tanks where the steel tank sidewall intersects with the tank bottom.  This exposure allows for frequent inspection of the critical weld at the base of the tank. However, this exposed area invites corrosion from the exposure to the elements if it is not properly coated and protected.

We frequently see owners who prefer to expose the tank chime by several feet. This creates problems when the bulk storage tank requires insulation. The shell insulation requires support at the bottom of the panels to prevent them from sliding down the tank. Some owners choose to support the bottom of the panels with clips around the side of the tank. The clips eventually cause insulation system failure from gravity as the panels begin to slip downward.  The downward slippage creates gaps and exposes the top of the tank, allowing further water intrusion. Consequently, moisture intrusion in the insulation adds significant weight to the insulation panels, accelerating their likelihood of failure.

Some asset owners wish to expose only twelve to eighteen inches at the base of the tank. The insulation requires either a welded or bolted support system around the bottom of the insulation to adequately support the insulation panels. Qualified installers offer welded or non-welded support systems, depending on whether the bulk storage tank remains in service during the installation process. The support system should be as wide as the insulation system plus allow a very small gap between it and the tank.  This will allow moisture to seep down the tank wall behind the insulation and may not be absorbed while also providing an indication to the owner that a problem exists.

Clips like these can exacerbate corrosion in the long term

Another alternative includes installing foamglass at the first twelve to eighteen inches of the tank base instead of raising the tank chime. Foamglass is non-wicking insulation that will not absorb moisture. Foamglass adds cost to a project and can be more difficult to install provides an alternative to owners who want a fully insulated tank.  This alternative system can be designed for removal and replacement of the foamglass by incorporating an insulation support system which allows for inspection of the corner weld.

Finally, tank owners should consider sealing the tank chime to prevent water from entering between the concrete ring wall and the steel tank floor.  Protective coatings can allow moisture to escape from under the tank without allowing rainwater droplets to enter through the seal.  This one-way barrier will likely reduce corrosion under the tank floor. This area exhibits high corrosive potential, especially in the first few feet from the edge. Coatings with expansion and contraction characteristics can also allow for flexibility during the filling or draining of the tank.

Inspection ports offer owners the opportunity to easily inspect steel wall thickness at various points around the tank. Debate on inspection ports centers on where, not whether, to install them. As a result, engineers vary on using "quadrants" of the tank to place ports at various intervals throughout the bulk storage tank insulation shell. 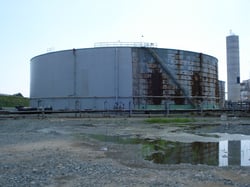 Adding cuts or openings to the insulation system increases the likelihood of moisture entering the insulation.  That said, we consider the stairs (specifically, underneath the stairs) to be the best location for inspection ports. Steps welded to the tank shell stand out as a moisture entry point because they require many cuts to the insulation.  So, it stands to reason that corrosion would most likely form underneath these entry points. More modern stringer stairs mitigate this concern due to the lack of welds or moisture entry points. All that said, inspection ports under stairs do cause inconvenience for access, but this location greatly increases the likelihood of actually finding the corrosion an inspector seeks.

Do not forget the pipes around the base of tanks

Removable insulation pads and boxes offer easy ways to insulate manways, valves and pumps all around the inside of terminal lines in and out of tanks. Their removable nature makes corrosion inspection easy.

Some pipes might use costly foamglass as well, but alternatives do exist. Some coatings can be applied directly to fiberglass insulation with a paint brush. These coatings can be reapplied if damaged and create seamless, flexible and micro-porous shells which allow moisture to evaporate. These coatings do not compare in strength to a foamglass insulation system, but come at a lesser cost.

To conclude, the most effective means to prevent corrosion is also the simplest: keep your insulation dry!

Schedule a lunch and learn with our technical consultants. Find out how you can reduce your risk from corrosion and lower your total ownership costs.

What is the cost of insulating a bulk storage tank?